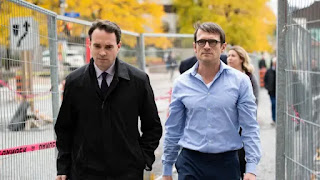 The Communist Broadcasting Corporation is reporting that "Cameron Ortis, the RCMP official accused of preparing to leak sensitive information, has a new lawyer as his case moves toward a trial date later this year. An eight-week criminal trial is scheduled to start September 6th."

"Earlier this week, Attorney General David Lametti announced that Ian Carter, who has defended Ortis since his arrest back in 2019, has been appointed a judge of the Superior Court of Justice of Ontario in Ottawa. Jon Doody, who works at Carter's firm, is taking over Ortis' defence."

"Ortis, who served as director general of the RCMP's national intelligence co-ordination centre, is charged with violating the Security of Information Act. He is accused of trying to share sensitive information with a foreign entity or terrorist organization and has been charged also with sharing operational information in 2015." Not.