Kim Bolan and Post Media News are suing me

What are they suing me for you ask? Three things. The first is defamation, the second is a copyright violation and the third is straight out of the Twilight Zone. Kim Bolan claims that whenever I say Tiocfaidh ár lá it means I want the UN gang to bring harm to her. 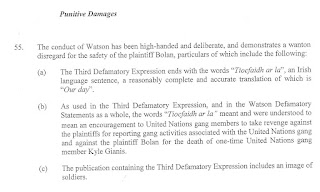 That is mentally deranged. I'm part Irish and spent two years in Ireland. Tiocfaidh ár lá is a common phrase. It's also a song like A Nation Once again. On Saint Patrick's Day I often say Erin go bragh, Tiocfaidh ár lá which means Ireland forever, Our Day will come. It has nothing to do with Kim Bolan. OK so let's take a look at the context it was used in.

They complained about a post I made entitled Kyle Gianis dead: Take a bow Kim Bolan and CFSEU. I took the post down but you can still see it temporarily on Google cache.

Kyle Gianis was a former UN member who to my knowledge had left the life and was trying to make a go of it hosting a fitness reality show on YouTube. I believe his departure from gang life was sincere and genuine. There were several recent attempts on his life. During that time Kim Bolan was defaming him. Kyle died during a confrontation with the ERT at a campsite. The CFSEU claimed it was a suicide. His fiancée said it was not a suicide.

CBC reported that ERT approached Kyle using tear gas and a 40mm less-lethal round. A 4 CM "less lethal" round is a lot bigger than any normal bullet. They are lethal. When I said Tiocfaidh ár lá in that post I was referring to the plastic bullets that have killed so many kids in Belfast. It means one day justice will be achieved. If not in this life, at the judgement bar of God. It's a way of recording one's dissent. It has nothing to do with Kim Bolan.

In the statement of claim, Kim Bolan states that blog post had a picture of a soldier in it which she claims is a threat. It was not. I've reposted the picture above. It was a screen shot from the movie Gladiator where Maximus turns his back on the emperor in a sign of disrespect. It was my way of recording my dissent for how Kim Bolan and the CFSEU misrepresented Kyle Gianis.

This is not the first time Kim Bolan created a fake death plot. Above is a screen shot to a comment from Blaze on my blog that I never approved after he told the court he was hired by the UN to kill Kim Bolan. Blaze was never a member of the UN and the UN never wanted to kill Kim Bolan. Kim Bolan just isn't as important as she thinks. Blaze idolized Kim Bolan because she gave him a stage to perform on. He admitted to the court that he would regularly post false information on her blog to throw the police off. Blaze still spams my blog with bullsh*t.

Blaze was convicted of selling crystal meth for the Hells Angels. His firearm offense while under a firearm ban was because he went to the wrong door with a shotgun to collect a debt for the Hells Angels. He was never a member of the UN. To claim the UN hired him to kill Kim Bolan is a bold faced lie. Now Blaze and Jamie Bacon are both trashing the Hells Angels who fed them. They have no respect for the club because they have no self respect. They are worthless liars. IHIT and the CFSEU are both compromised for paying them to lie.

At first she lied and said it wasn't Damion Ryan when we all knew it was. Someone had sent it to me and recognized him. Then finally she admitted it was. She wanted me to take it down because he was wearing a filthy few patch. That means he had killed someone in Greece, likely Larry Amero's co accused. You don't have to have killed someone to become a member of the Hells Angels but you do have to have killed someone to get a filthy few patch. Kim Bolan didn't want everyone to know about that because Damion Ryan was cooperating with the police in BC despite the fact that he killed Mo and was running the drugs out of the DTES.

Damion Ryan gave up Naseem Mohamed, the person he hired to kill Anees Mohamed because that's the way the Wolf Pack roll. They have associates testify against the people they hired to commit murder so IHIT gets a conviction. In exchange, they get away with ordering the murder and are allowed to keep selling drugs. This is what we now face in E Division.

So when the Fake News says I haven't filed a response, they're lying. I've filed a response and a counterclaim. I totally respect the confidential nature of pretrial negotiations. However, court documents are, as Keith Fraser and Kim Bolan would say, part of the public record.

As I previously said, this will not end well for me. This isn't my first rodeo. I know how this works. Large corporations have unlimited resources and keep appealing decisions until they win. Judges don't like having their decisions appealed. So the judge will take one look at me and one look at them and say yup, it's a no brainer. Money talks and the truth walks. 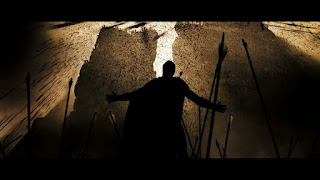 Turns out BC does have anti SLAP legislation just like Ontario does. Everyone is accountable.

The freedom of expression is protected by law. Kim Bolan's Statement of Claim is defamation because it contains statements that are not true. When Blaze kept posting on the Dirty that I had been charged with sexual interference, that was defamation because it was untrue. It was something he just made up. It never happened.

I knew it was Blaze because he said if you check the CSO you can see that I have been charged. Only when people did check the CSO, there was nothing there. Blaze was the only person that would have said that. The other trolls I had wouldn't have provided the source that would prove them wrong. They're not that stupid.