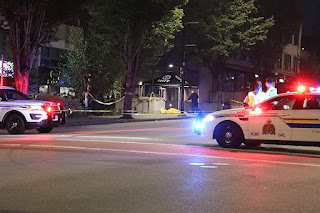 Update: 6ixaktv is reporting that the victim is Mustafa Khan

The Burnaby Now is reporting that "Homicide investigators are in Burnaby investigating a fatal shooting in the Heights Tuesday night. Police were called to the 4700 block of Hastings Street just after 11 p.m. for a report of shots fired, according to a Burnaby RCMP news release Wednesday morning. When officers arrived, they found one man dead at the scene, the release said. About 20 minutes later, police got another call about a vehicle fire in the 8200 block of Burnlake Drive. Police believe the incidents are linked, according to Burnaby RCMP."