Alberta drug bust tied to the red and white 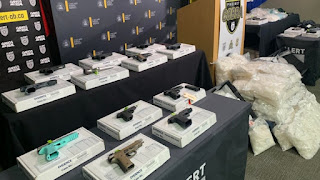 CBC is reporitng that "Fifteen people and a Calgary business have been charged following a cross-border, $55-million drug bust. It's believed they were moving cocaine and methamphetamine produced by Mexican cartels to Alberta, says a police organization dedicated to serious and organized crime. Alberta Law Enforcement Response Teams (ALERT) said Wednesday the investigation started in 2020 and involved Calgary police, U.S. Homeland Security and officers in Niagara, Ont., Saskatchewan and Osoyoos, BC."

"Fifteen people now face more than 80 charges. Meth and cocaine believed to be on the way to Alberta was seized in the United States and elsewhere in Canada, ALERT said. Lead investigator Sgt. Tara McNeil said the drugs seized were destined for the streets of Calgary and across the province. Among those charged is Calgarian Talal Fouani, 46, said McNeil. In August, Fouani and his wife were shot in his Bentley outside their southwest Calgary home."

Alberta's gang enforcement is rock solid. BC's is not. Talal Fouani was tied to the red and white.

Kevin Van Kalkeren was working out of Osoyoos for David Giles in 2016.

Don Lyons was arrested in Osoyoos back in 2015.

All roads lead to Rome. Well most of them do arond here.