Here's a little song and dance by another raging lunatic from the World Economic Forum named Chrystia Freeland. She is Justin Trudeau's partner in crime. If you skip to 38:34 in the video you will hear her come right out and say people in the middle class need to take a pay cut. Say what? I thought those fake commies were all about protecting workers and the middle class. Now she wants to roll them back. Thus the real agenda is finally revealed.

The Communist Manifesto coined the phrase Workers of the World Unite! You have nothing to lose but your chains. That's not entirely true. We actually have a lot to lose - our house, our car, everything that we own including our civil liberty. Even our right to move and to travel. They want to take that away from us in their 15 minute cities. They want to control everything we do and take away everything we own. When you think about it, we actually do have a lot to lose.

Aleksandr Solzhenitsyn said the Communist Manifest was a lie. Trade Unions in Communist Russia had no rights. They didn't even have the right to strike. That's what it's like in Communist China. Communists also preach about the poor yet we can clearly see that is another lie. Chrystia Freeland doesn't want to raise the standard of living for workers and the middle class, she want to impoverish them. We can rightfully debate whether Chrystia Freeland is a Communist or a Fascist because when you look at her Ukrainian Grandfather that she brags about it's hard to tell. 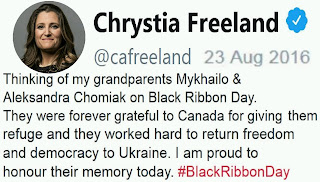 Chrystia Freelands grandfather Michael Chomiak was the editor in chief of a Nazi paper called the Krakivs'ki Visti. "After his death in 1984, his son-in-law, John-Paul Himka, accessed his papers, which are now held in the Provincial Archives of Alberta. According to Himka, the anti-Jewish materials published in Krakiws'ki Visti contributed to the mass murder of Jews."

This is where we need to redefine some of our semantics because some of our current definitions are misleading. Fascism and Communism are the same thing. They both believe in big government and reduced freedom. Hitler was originally a Socialist and the original name of his Nazi party was the National Socialist German Workers' Party. Likewise, the WEF are Communists but they have armed Nazi's in the Ukraine to eliminate Russia and obtain a monopoly on their brand of Communism. We all know when Capitalists fund Communism it's not to share their wealth. It's to increase their wealth. That brings us to the heart of the misdirection.