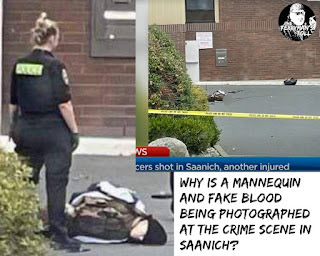 Update: Oh yeah and now this bullsh*t about BB guns to support Justan Idiot's ban on airsoft. Fake News. Why would someone shoot a BB gun at a bus knowing they're trying to ban them? They wouldn't. The ones trying to ban airsoft guns paid someone to do it.

I spoke about the Saanich bank robbery that wasn't a bank robbery at the time. However, Justin Trudeau's spin doctors have just released a ridiculous report and the fake news is running with it so I will highlight a few of the many points that fail the test of believability.

I do not believe that two 22 year old twin bothers with no criminal records shot six highly trained ERT members. I think that is a bold faced lie. The incident happened, there's no question about that but there's no way those two kids did it. The suspects wore masks. One witness said the suspects were eerily calm. They very calmly waited for the police to arrive.

That was a professional. It was not an insane 22 year old kid with a death wish wanting to kill police because he disagreed with gun control. That is a bold faced lie. An inexperienced kid would have been anxious, jumpy, likely high on cocaine for a chemical boost. That's not what the witnesses saw. The witnesses saw a professional from Blackwater. That's what they saw.

At the time the fake news ran a picture of a forensic mannequin and said this was a picture of a dead suspect. It was not. They use forensic mannequins in crime scene research. Claiming that mannequin was a dead suspect was a lie. Do I really believe the World Economic Forum would hire a private contractor to do a mass shooting just to implement gun control? Yes I do. They have a specific agenda and as we have all seen, they will commit murder in a heartbeat to implement that agenda. I do not believe all mass shooting are fake. They are very real but I do believe that some of them are orchestrated just like Steven Seagal does.

The twins carry the same last name and are from the exact same area of Vancouver Island as Admiral Bob Auchterlonie. They are not his sons but it is difficult to believe they are not related. Vice-Admiral Bob Auchterlonie is leading the disinformation campaign against Russia in the Ukraine. Steven Seagal went to the Ukraine and investigated the site where Russian prisoners were killed by a Ukrainian missile. The fake news claimed the Russians had bombed their own POWs. They lied. It was hit by a Ukrainian missile just like Poland.

There was another highly suspicious mass shooting at a gay bar in Orlando. Reports came in that the shooter was himself gay. Witnesses claim he had attended the club previously on more than one occasion. The biggest inconsistency in that case is the number of people shot and the number of rounds fired. 49 people dead, 53 people injured and a firefight with police. That's a lot of reloading for one AR and one handgun. Logic would declare there was more than one shooter in Orlando just like in the San Bernardino case. Do I think it's possible that the CIA orcastraited this horific event and blamed it on one of the vctims they shot? Yes I do.

Why would a Gay Muslim shoot other Gays at a bar he frequented? It doesn't make sense. The purpose of that false flag attack was to ban ARs and high capacity magazines. That was it's agenda. Since the Covid pandemic and the governments over reach Tulsi Gabbard has changed her position on gun control and the second amendment. Does that mean she's going to do a mass shooting and kill police? Of course not. The fake news is trying to portray anyone who disagrees with Justin Trudeau as a potential mass shooter. That is an offensive lie once again used to stifle opposition and we all know where that road leads.

Just like the purpose of the Orlando shooting was to ban ARs in the US, the purpose of the Saanich non bank robbery was to ban the SKS in Canada. It was orchestrated to coincide with Justin Trudeau's last minute Amendment over reach the Assembly of Fist Nations has denounced as well as several rural Liberal and NDP Members of Parliament.

This fake report that just went public claims that the suspects in the Saanich bank robbery used a SKS with prohibited magazines. That's a lie. The SKS is a 100 year old rifle with an internal magazine. It is physically possible to alter a SKS and get an external removable magazine but those magazines always jam on the SKS. That's why people say don't bother. If you want an AR buy an AR. Altering the SKS to accept an external magazine jams. They don't work.

The fake report also claims that "The suspects each had a valid Possession and Acquisition Licence for firearms." That's the motive for the lie. Justin Trudeau claims that every legal firearm owner is a criminal when they are not. If you have a valid firearms liscense and own restricted firearms, the police do a criminal record search on you every day. Criminal activity is always progressive. Legal firearm owners would never do a mass shooting because they are passionate about their right to own a firearm. The purpose of mass shootings is to implement gun control. That's the exact opposite of what a legal firearm owner wants.

Justin Trudeau is a liar with an agenda. So is the fake news. They both have the same agenda.