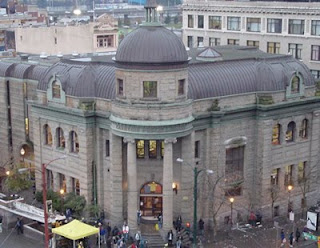 Speaking of Jim Chu, he just held a town hall meeting in East Van at the Carnegie centre in response to the sit in and public protests about the investigation surrounding Ashley Nicole Machiskinic's death. Activists claim she was pushed out of a hotel window and was murdered for a drug debt. They were calling on police to take her death seriously and the mistreatment of women in East Van.

Sounds like the police took a lot of heat at the meeting and locals expressed great concern over public trust in the police there. Jim Chu urged residents to work with police to end violence against women by reporting crime.

However, Daisy Kler of Vancouver Rape Relief said more than 70 per cent of women who contact the women's shelter never call police because they are afraid they will not be believed or have had a previous bad experience with police.

"Arrest the men doing violence against women," she urged Chu. Which is kind of hard if people don't report crime or give information to the police. Yet if there is no public trust, that's just not going to happen. Thus the dilemma.

Another woman, who lives in the Europe Hotel, shouted at the police chief as she recalled seeing a woman recently abducted by a man late at night but police refused to take her complaint, even though she had a licence plate number.

Jim Chu holding the town hall meeting was a good thing. Especially when local activists in the sit in were calling for a meeting with him specifically. That means they trust him.

The pushing to the ground of the disabled woman by an officer in East Van seems to be the tip of the iceberg. Many complain that police there treat the locals like garbage. Obviously if they report a crime and nothing is done about it, that is going to weaken public trust and discourage crime reported.

Some say that is a city hall initiative. I heard reports of police officers express their concerns that city hall started closing down the police station at night to suppress crime stats. That's kind of like closing down an emergency ward of a hospital at night.

Locals also expressed concern about the presence of Wally Oppal at the meeting and his appointment to investigate the Pickton inquiry. "I do not support you being the head of the commission," Radek told Oppal. "You didn't support us when we called for a public inquiry." She suggested Oppal is using the inquiry to boost his pension income.

I for one certainly didn't think he was a good choice to lead the inquiry. He was a former judge who publicly declared the judicial system in BC was fine and was soundly defeated in his re election bid. Public perception is he's a good choice to oversea the Pickton inquiry if the government wants to cover something up. Maybe he can oversea the Kash Heed scandal as well.

The whole meeting reminds me of an all candidates meeting that was held at First United during the civic election when the Woodwards Squat was on. Many locals expressed many concerns. One candidate expressed her concern over an NPA policy of having the police evict homeless from under bridges in the city. She thought that was cruel.

One of the people who had been evicted from under a bridge spoke and expressed his concern about having all his personal possessions stolen by the police as he was evicted. I cited the practice and asked where this police brutality will take us as a society. One candidate who was a former police officer got defensive and started to back pedal as he talked about the many accusations of the police assaulting members of the community in East Van.

I explained I wasn't taking about assaults when I was referring to police brutality. I was referring to the cruel practice of evicting homeless from under bridges and stealing their few personal possessions in a time when record budget cuts had seen a record number of homeless on the street. I said that practice was cruel and brutal then asked where will that kind of brutality take us as a society?

That was the year when the NPA was wiped out and COPE won a landslide under the leadership of Larry Campbell, Vancouver's own Da vinci. Although things greatly improved temporarily, some things went in the wrong direction and the over all situation has got worse. The Four Pillars program was about four pillars not one. Every time extremists from VANDU cited the four pillars they over emphasised the harm reduction pillar and ignored the other three pillars in the program.

The four pillars consist of Prevention, Treatment, Enforcement and Harm Reduction. Extremists completely ignore the enforcement and completely erase that one. All they do is scream harm reduction over and over again like spoilt brats demanding every drug under the sun at taxpayers expense. One officer referred to the program as the one legged horse. Four pillars will not support a building or a program if you only use one pillar. It’s like only using one oar in a boat designed for four. You just keep going in circles.

I'll tell ya what harm reduction is. Harm reduction is removing all the crack dealers from an area where addicts are seeking treatment for drug addiction. When an addict is seeking treatment and everywhere they go they have dealers in their face crying Crack Crack Crack like possessed ducks from an Alfred Hitchcock movie then that addict can't recover or have effective treatment.

We need to get over ourselves and stop suppressing crime statistics by making crime difficult to report in East Van. Reopening the police station at night would help. We need to end the brutality towards the homeless and we need to stop caving in to VANDU and start enforcing the drug laws that do exist by arresting the drug dealers outside the Carnagie centre (and Surrey Central). We need to stop kicking the cat and arrest the drug dealers not the drug addicts. They are the ones throwing women out of windows in East Van. That kind of violence needs to stop.