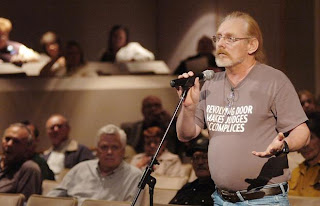 The Judicial Town Hall meeting in Abbostford will be broadcast on Shaw Cable’s Channel 4 on Oct. 24 at 2 pm. I'm hoping someone will tape it so we can youtube Steve Brown and Judge Wallace Craig's statements which I anticipate will be highly relevant.

The Abbotsford Mission Times ran a photo of one concerned citizen sporting the new "Revolving Door Makes Judges Accomplices" T-Shirt that has become so popular here. Obviously a lot of people here are concerned with organized crime and the lack of judicial accountability.

Judge Craig has been a pioneer who has cited case law in defending the public's right to criticize judges in a democratic system. The Times reports that he spoke about how the concept of rehabilitation has been misinterpreted by the courts.

Craig said the concept of rehabilitation has replaced the idea of penal consequence when it comes to sentencing, and described it as an abstract process where judges try to transform evil into docility and tractability.

"Each time a judge fails to grasp the enormity of a violent act and chooses rehabilitation rather than punishment," Craig said, "the victim becomes the proverbial lamb being sacrificed on the altar of rehabilitation."

Strong words and truthful words yet I would like to make a distinction. There is absolutely nothing wrong with rehabilitation of prisoners. Indeed that is the ideal to which we all should seek. A privatized prison that is mandated to make a profit has no concern for rehabilitating prisoners.

The problem arises as Judge Craig has pointed out, when courts twist the concept of rehabilitation to simply mean avoid or minimize any penal consequences. I heard a judge once say in the sentencing of a young offender for a very violent crime that the law has no provision to apply a sentence as a deterrent to crime. I thought to myself, you have got to be kidding. If the law doesn't have that provision it certainly should.

As a result we live with the other extreme where people who commit very violent crime have no real consequences and don't serve lengthy prison sentences. We need mandatory minimum sentences for violent crime, not for the possession of pot. It's really that simple. You commit a crime with a firearm and you get a mandatory minimum sentence. More than if you had committed a crime without a firearm.

Steve Brown stated that his brother in law might still be alive today, if two of his accused killers hadn't had previous second-degree murder charges for the beating death of a 15-year-old boy in Port Coquitlam pleaded down to manslaughter with 18 months behind bars. That is a significant statement that needs to be addressed. How can someone charged with murder only get 18 months in prison only to murder again after the fact?

The Times reported that Brown thinks people should stop supporting an administration that enables criminals and called the province's restorative justice program a failure. Indeed, spending money on prisons and fixing our broken judicial system should be an election issue.

It is another area Gordon Campbell has failed miserably at. Yes the criminal code is federal, yet the judges in BC aren't applying the laws to organized crime in BC the same way they are in Ontario, Quebec, Manitoba or other areas of Canada. This needs to be corrected.