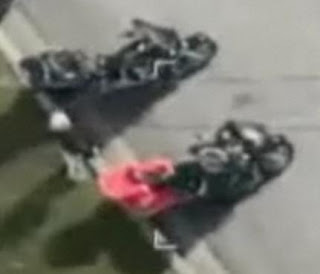 Well this is priceless. Two Hells Angels were caught racing through a construction zone at speeds up to 160 kilometres per hour and had their bikes impounded under the new legislation. At first I thought the new legislation was a bit extreme. Getting your car impounded for going 70 KM/H in a park zone with no people around is extreme. Ticketed by all means but car impounded? I'm not sure if I'm comfortable with that.

But 160 KM/H in a construction zone? Well that's a bit different. I have to chuckle to see who it is that got caught under the new legislation. Sure the bullies and murderers are going to play the pathetic victim again but the bottom line is, excessive speeding then driving like an as*shole weaving in and out of traffic on a motorcycle isn't something to be proud of.

Neither is using Hells Angels colours to intimidate others to let them break the law. That's being an irresponsible bully and an as*hole all wrapped up into one. That's how young kids on imports ride not grown men on real motorcycles. Mind you it's hard to tell what they're riding. With those big a*s fairings they look more like Goldwings than Harleys.

The Hells Angels aren't murderers? Well who killed Juel Stanton? Who killed Percy Soluk? Who supplies the cocaine for the Vancouver gang war? These b*tches are worse than snitches. What's with that pink passenger seat anyways? No wonder someone pushed the bike over in the video. Which nomad was the pink princess seat for?

Posted by Dennis Watson at 1:11 PM