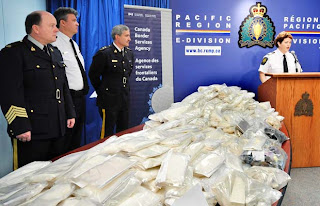 But it wasn't as much as the 2 1/2 tons of Hells Angels cocaine seized. No charges were laid in that case thanks to Richard Barszczewski.

And it wasn't as much as the ton of cocaine seized in Port Hardy. Interesting that the really large cocaine busts are never tied to a criminal organization. Much.