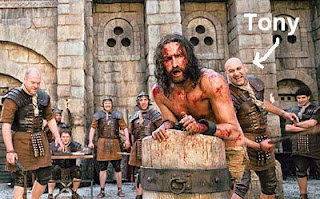 Tony's Big mistake wasn't selling and using drugs. Tony's Big mistake was using the Lord's name in vain. Jesus taught "Not everyone that saith unto me, Lord, Lord, shall enter into the kingdom of heaven; but he that doeth the will of my Father which is in heaven." Matthew 7:21

He explains that many will say Lord did we not prophecy in thy name? In thy name did we not cast out devils and do many might works? To which he tells us he will respond "I never knew you: depart from me ye that work iniquity."

Paul did the same thing. He thought he was doing God a favour by stoning Christians. Then Christ confronted him and said "Saul, Saul why persecutest thou me?" Acts 9:4 From that moment on, Saul changed his ways and his name and became a powerful servant for good.

Tony can change. He's a big boy. But wearing a bling and using the Lord's name in vain won't do it. Coming clean by admitting what he's done and helping prevent the same thing from happening to others would be a start.

It's kind of strange how Juel Stanon took over Tony's old stomping ground and was shot dead a couple months after Tony got out of prison.