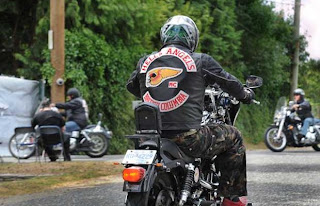 Well the first one is sad as in pathetic and the other one is sad as in misguided. Take a look at the bowling shoes this guy is wearing and the full face helmet. He must be a striker for the Kingpin crew.

The other one is the sad news of two motorcyclists who lost their lives Saturday. The motorcycle was driving alongside a pickup truck, driven by a 17-year-old man, when the teen started to change lanes towards the bike.

The Mounties say the truck corrected and didn't end up changing lanes, although the 51-year-old motorcycle driver pulled up beside the pickup and glared at the teen inside. The news release says during this exchange, the motorcycle driver didn't notice a curve in the road and crashed. The motorcycle driver and his 40-year-old female passenger, who were both from Nanaimo and wearing beanie-style helmets, died later in hospital.

Here's the tragedy. Likely the kid didn't see the motorcycle in his blind spot but stopped when he did see it. So the big bad biker has to make a big deal about it and start glaring at him when he should have been watching the road and has now lost his life and the life of his passenger over it.

Glaring at someone and not seeing a turn in the road really isn't very bright. There was another story on Castanet in Kelowna about a woman who tapped on the horn when a Hells angel cut her off. He went ballistic glaring at her, writing her plate number and spitting on her car. That's the lingering image the public has when the Hells Angels comers to mind and it really isn't a pretty or proud one.