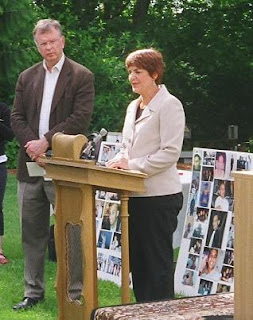 Well there appears to be some minor rumblings over Carol James' leadership. That reminds me of when Gordon slime ball Campbell stole the party from Gordon Wilson. Gordon Wilson was the one who put the party on the map. Before the televised debate with him, Rita Johnston and Mike Harcourt, the BC liberals simply didn't exist.

During the debate Rita Johnston was insulting Harcourt's manhood while Harcourt just stood there with an American Express card and a BC Care Card. They were bickering back and forth while Gordon Wilson interjected "There you have it folks. Now you can all see first hand why we get absolutely nothing accomplished in Parliament." He was priceless. That debate put the liberal party on the map.

Then Gordon Wilson had an affair with one of his MPs Judi Tyabji and he lost the leadership of the party to which the evil opportunist Gordon Campbell jumped at. Gordon Wilson ended up marrying Judi Tyabji I might add. I thought he was way better than the drunk driver that replaced him.

Carol James is a trustworthy competent leader. I trust her more than I trust others in her party and a million times more that Gordon Campbell. I was disappointed she caved in to selfish belligerent members of her party over the pay raise. One git threatened to leave the party if she didn't cave in on supporting Campbell's second proposed pay raise and gold plated pension so she caved in to save the party. She should have given that guy the boot and voted against the pay raise and gold plated pension.

That's why I say I trust her more than the Gordon Campbell opportunists within her party. Bruce Ralston and Mike Farnworth are trustworthy but I think they support Carol. To me she epitomizes dignity and respect. Her mission is to restore dignity to the elderly and the oppressed and in so doing restore dignity to the disgraced province.

The same old stereotype is what scares people away from the NDP: the right claims the NDP will tax and spend us silly. Me thinks Gordon Campbell and Brian Mulroney did a fine job at that. It was refreshing to hear Bill Vandersalm speak at an anti HST rally in Vancouver. He spoke about the importance of education and other social programs and I shook my head and wondered if I was listening to the same Bill Vandersalm we had known.

Carol James spoke after him at the rally and thanked him for his support of the campaign against the HST and for his contribution to politics. She said he was the reason she got involved in politics when he started making dramatic cuts to education. I had a chuckle at that since I remember it well. The slogan from the teachers was "Stop Vanderlism."

When all is said and done, I'd be much more leery of endorsing a new opportunist leading the NDP in the next election. Carol James has earned the spot and has carried it with dignity and competence. She came to the Chris Mohan memorial mass in Surrey herself. Lets hope she retains the leadership bid in the party's leadership convention.

Posted by Dennis Watson at 3:49 AM