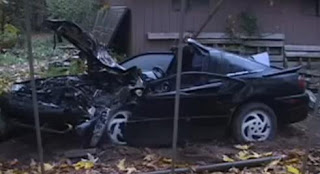 Speaking of speeding and reckless driving, I met a guy with a wrecked car. He was speaking out against speeding. The car he had with him was totalled. The front end and the driver side was mangled. The driver had died in the accident. It was his son.

He has a fascinating story to tell. His son was speeding, lost control of his car on a hidden turn, scraped a pole then hit a tree. He was trapped in the car for quite some time before rescue workers were able to get him out. The father arrived at the scene and spoke with his son while they were trying to free him from the vehicle. He waited with his son at the hospital where he was bumped for emergency surgery because they wouldn't send a second anaesthesiologist and died waiting.

It is a powerful and tragic story. The father tours and speaks to high school students about the dangers of speeding. At the hospital the father asked his son if he had learned his lesson about speeding. His son said yes. He asked his son if he would come with him to speak to youth about the dangers of speeding and he said as soon as you wheel me out the front door I'll do it. Unfortunately, they wheeled him out the back door because he was dead. So the father has his sons ashes in the car when he speaks about the event. Very powerful. His sons runners are still trapped in the drivers compartment because they were unable to get them out.

Relating this to our recent event of reckless driving I'd have to say that there's a big difference between opening a motorcycle up on the freeway in a straightaway away from traffic and weaving in and out of traffic in a construction zone. The latter is just plain irresponsible because it puts others at risk. It's the kind of thing a young kid would do not a grown man. It doesn't display the wisdom and maturity of a seasoned biker. The other biker who lost his life and the life of his passenger last Saturday because he was glaring at a kid who didn't see him was also tragic. Those kinds of losses are senseless. It's not the kind of thing a grown man would brag about.

Anyways the father has a web site called Jammin4Jay and is well worth visiting. He's a powerful speaker and has an excellent presentation for schools and youth.