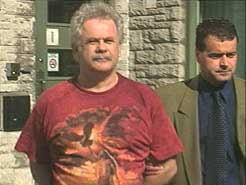 On a more positive note, this is one someone from Quebec sent me. It's about a Hells Angel with talent. Well, former Hells Angel named Claude Berger.

My French needs help but it would appear that in 2002 he was arrested for threatening a judge. As a result he was sentenced to 15 months in prison.

He was a former trumpet player with the Quebec Symphony and a former professor of music at Sherbrooke College. He claims that since 2002 he has no longer been with the Hells Agnels. Now he's a street musician and sells his own CD's. He does a great Louis Armstrong.

He is very talented. I respect that. Someone asked me if there was such a thing as a former Hells Angel. Implying that if you leave the group they will kill you. I don't know the answer to that question. I hope so. If the Hells Angels want to improve their image they have to start letting people go. Salut Claude. Tout le meilleur.