100 Kg of Cocaine seized in Kelowna 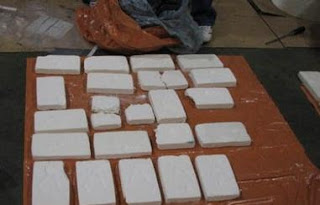 Well police announced at the press conference they seized 100 kg of cocaine in Kelowna. Indeed that's more than the 9 kg seized from David Giles and his associates and the 52 kg in Glen Hehn's storage locker but not as much as the 275 kg recently seized in Vancouver or the 2 1/2 tons from a boat bound for the Hells Angels. The 100 kg seizure is the largest in Kelowna. Just goes to show how large that 2 1/2 ton shipment was.

Two locals from West Kelowna were arrested and of course someone from Surrey had to be involved. I am a bit confused about the Mexican cartel connection though. On the news it said the cocaine came from Argentina and flew to Miami then to Vancouver. It would appear that it bypassed Mexico completely.

Although a Mexican was among those arrested, people from Argentina don't like to be called Mexicans. In fact no one in Latin America does. MS 13 were from El Salvador. Mexico think Argentina are snobs and Argentina think Mexican are second class citizens of Latin America. It's a shame really.

No word on what gang was bringing in the cocaine. Again. I find that odd. Drug busts in Victoria today too. Maybe CSIS is throwing the dog a few bones so Richard Barszczewski's contacts keep their job during contract negotiations.

Posted by Dennis Watson at 4:34 AM