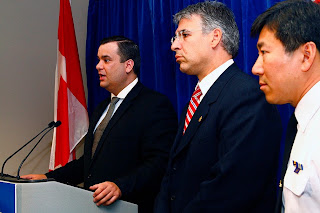 The new laws in BC for impounding vehicles concerns me. Again I stress this is a BC law not a federal law that has been implemented by the provincial government with the lowest approval rating in the country. Speeding and drunk driving are bad. We all agree. Yet crime should be punished according to the nature of the offence.

Speeding kills innocent people. We all got a good laugh when two Hells Angels had their bikes impounded under the new legislation for speeding. Twice. Yet I might add their case was excessive speeding and reckless driving which endangered the public. I am not comfortable with a law that says the police can impound your car for a week for going 40 K over the speed limit.

People will argue that although the law says that it's more common for cars to be impounded for speeding more than 40 K over the limit. Well then the law should say that because more common means they do impound for 40 K which is becoming a burden on our over taxed policing.

An article in the Golden Ears Daily said most of the recent impounded vehicles in BC for drinking and driving were for people who blew over .08. They said most that means not all. That means some people had their cars impounded for blowing .05 which means they only had two drinks and their cars were impounded. That is not right.

Officers previously issued up to 40,000 24-hour roadside suspensions a year to drivers in the "warn range" of 0.05 to 0.08. Now they are seizing your car for .05 and giving you a criminal record.

Right now we are faced with yet another Gordon Campbell tax grab. And they told us the NDP would be the ones who would tax and spend. Yet no NDP government has ever taxed and spent like Gordon Campbell or Brian Mulroney has. Isn't that ironic? Yet the NDP are endorsing the new laws just like they endorsed the MLA pay raises.

Maybe we should be more concerned with human trafficking and organized crime then possession of pot and driving at .05. Why is it we live in a province with such consistent political extremes?