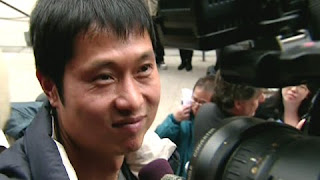 Well here's another bizarre one. A Toronto Shopkeeper catches someone stealing from him and makes a citizens arrest. Simple enough. Well not exactly. The shopkeeper was charged with assault and unlawful confinement. I kid you not. This ranks right up with the joke about how if someone breaks into your home in Canada and they slip on something in the process, they can sue you for damages. You have just entered the Twilight Zone.

In Canada when you make a citizen's arrest you can only hold the person until the police arrive. You can't haul him off and drag him to the police station like you can in the US with the era of bounty hunters. That might be part of the problem. Seemingly the shopkeeper tied the guy up with rope and put him in the back of his car. I suppose this would depend on how far away the car was and if he detained the guy in the back seat of his car or his trunk.

Either way, charging this guy is insane. Can you imagine if he received a worse sentence than the person who stole from him? Wouldn't that make Canada a joke. Initially he was charged with assault with a weapon because he had box cutters in his possession but those charges were later dropped. If the guy pulled out the box cutters and started cutting him up that would be different but to say that someone at work who happens to have box cutters in his possession can't make a citizens arrest is nonsense.

Liberal MP Joe Volpe is seizing the opportunity to propose a bill that would make citizens arrest easier. Yet the law already exists and it can't get any easier than it is. You have to see the person commit the crime. You have to tell him you are making a citizen's arrest and tell him what he is being arrested for. You can then hold him until the police come not drag him anywhere.

At least it's not as bad as the Alberta farmer who caught someone stealing and hunted him down with guns and shot him. Yet giving criminals more rights than law biding citizens is crazy.

Posted by Dennis Watson at 9:12 AM