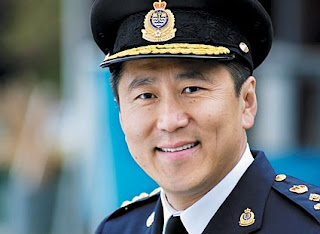 We all know the police have taken a few PR shots over the last few years. The most obvious one was the RCMP taser incident at the airport. What a tragedy. Obviously it was a mistake. Personally I have a problem with police getting a guy on the ground then tasering him over and over again while they already have him down. I would deem that to be a miss use of the weapon.

Nevertheless, we know the VPD have taken a few hits as well. Beating up the wrong guy when they responded to a domestic dispute comes to mind. The young cop that was caught selling pot on duty is another yet the RCMP just caught one of theirs for possession of pot. For me the cop pushing the disabled woman to the ground was the real shocker.

So here we have Jim Chu front and centre problem solving like he does so well. In response to the provincial government's proposed model for an Independent Investigation Office he has called for a greater role by a civilian body to investigate alleged crimes by police. I agree. Any appointed body is met with cynicism. Especially the new appointment to the RCMP. I think an increased role of a civilian body would be a healthy balance and help restore or build public trust.