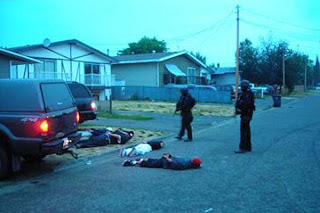 Only after the Crew started getting some bad press for cutting off fingers for drug debts many members of the crew crossed over to join the Independent Soldiers. Who as we know are not independent any more and are tied to Randy Naicker and Larry Amero of the Hells Angels. So in essence the crew crossing over to the Independent Soldiers was just a publicity stunt as the Hells Angles were still ultimately in charge.

It should then come as no surprise that the Crew, acting under the banner of the Independent Soldiers, have maintained their ruthless debt collecting tactics of hacking off fingers for drug debts. Yet their "rivals," the Game Tight Soldiers are also tied to the Hells Angels. Steven King, the leader of the Game Tight Soldiers was seen wearing a Renegades rocker riding with a Renegades patch member. So clearly the Hells Angels are tied to both groups and still run the drug trade in Prince George.

So when we hear of people dying in Prince George over drugs or getting their fingers cut off for drug debts or found chained in the basement of a crack house in Prince George getting tortured for drugs debts, clearly the Hells Angels are ultimately responsible and financially benefit from it.

That leads us to the nest question. If the Hells Angels run the drug trade in Prince George and are ultimately responsible for the drug related violence there, what about Dawson creek?

Then we have to ask, if the Hells Angels control the drug trade in Prince George and quite possibly Dawson creek as well, where else to they do business? We know the East Vancouver chapter are actively involved in Kelowna as that appears to be their retirement village. What about Ontario. We know the Hells Angels in Ontario were primarily involved in the drug trade. In fact their business was a violent bid to take over the drug trade in smaller towns once they were established in the larger cities.

Perhaps some of the residents of Prince George will be empowered by the Gang task force's presence and their upcoming Gang Summit. Perhaps Dawson Creek will be the next stop on the tour. Hopefully some more tips start coming in so the cause of the violence can be dealt with.