Obviously the big news is the fact that some white guy in Moncton New Brunswick shot and killed three RCMP officers and wounded two others. The suspect, Justin Bourque has been found and arrested. Still no word on a possible motive for the murders. He did have an interesting link on his facebook to the number of guns Canada sells to terrorist countries. CBC posted an interesting article on the matter. Nevertheless, shooting RCMP officers is off the hook as in messed up. 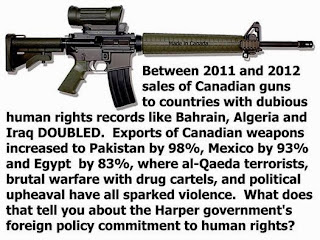 Update: Blog readers have been trying to discover a motive that would make Justin Bourque target police officers. One possible theory is the murder of Daniel Levesque who was shot and killed by Moncton RCMP in 2013. Daniel was accused of trying to break into a car and he was shot dead by police. The police investigation claimed Daniel was killed by a previous stab wound not by the police shooting. It's kind of hard to visualize how someone would break into a car with a fatal stab wound. The media co-op suggests that Justin Bourque was friends with Daniel Levesque.

If that was the case, then it would reveal a double tragedy. First is the murder of Daniel Levesque which went unpunished. The second is the murder of three other police officers who were likely not unloved in that shooting. It reminds me all too well of the Belfast / Jerusalem dilemma. You kill one of ours and we kill one of yours. That logic fails.

The old law of an eye for an eye never meant that if someone commits murder then you execute some other innocent person from the same race, religion or in this case occupation. Natural justice means if someone commits murder, that person is charged and tried not someone else. Indeed, as Martin Luther King would say, that definition of an eye for an eye leaves everyone blind.