Micheal Smith nails it. This columnist from the Vancouver Province reported that Steven Law is one of the most notorious, rich and secretive tycoons in Asia, a man sanctioned by the U.S. for his family’s alleged ties to the narcotics trade and support of the former military junta that ruthlessly ruled Burma. But that didn’t stop Canada and B.C. from rolling out the red carpet this month for an Asian trade delegation that included Law, whose father, Lo Hsing Han, was nicknamed the “Godfather of Heroin.” The delegation that included Law was wined and dined in Toronto and Vancouver, where participants met with Premier Christy Clark and cabinet minister Teresa Wat.

Law’s American assets have been frozen by the U.S. government and he is banned from doing business with American citizens. So Stephen Harper and Christy Clark says come on in. “Lo Hsing Han, known as the ‘Godfather of Heroin,’ has been one of the world’s key heroin traffickers dating back to the early 1970s. Steven Law joined his father’s drug empire in the 1990s and has since become one of the wealthiest individuals in Burma.”

The country was ruled for years by a brutal dictatorship condemned around the world for its appalling human-rights record. The generals who ran the country were accused of gross abuses, including the forced relocation of citizens, use of child soldiers, state-sanctioned rape, widespread corruption and other outrages.

International Trade Minister Ed Fast said we didn't know about his background. Hard to believe but the fact that his background is now known is not debatable. What are they going to do about it? Has their position on welcoming him now changed?

Speaking of heroin, why on earth do we go to all that trouble of making up and handing out flyers warning the public of bad heroin on the street cut with fentanyl that has resulted in numerous deaths, without arresting the drug dealers selling it on the street? That is insanity. The heroin gets cut at the street level. The fact that we aren't arresting the heroin dealers on the street in East Vancouver and Surrey is ridiculous. 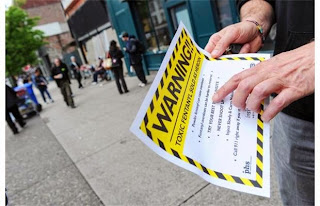