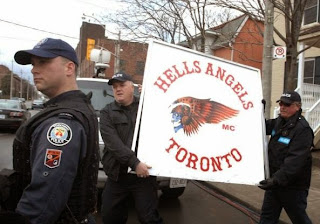 The Toronto Star and the Metro News is reporting that Hells Angels can’t keep Toronto clubhouse says Ontario’s top court. The Hells Angels Motorcycle Club has lost a bid to hang on to its old clubhouse on Eastern Ave. On Friday, the Ontario Court of Appeal quashed a court challenge by the bikers to win back their fortified east-end clubhouse.

“The property was the quintessential example of real property as offence-related property,” they argued. “It was not a residence by any conventional stretch of the imagination, but was instead a fortified bunker and served as the pivot point around which multiple designated substance offences revolved.” Ontario courts are much better than BC courts but Ontario courts are still at risk.

The Hells Angles lost control of the building in April 2007, when dozens of police with battering rams burst in and seized control as part of a project against drug trafficking. In the trial that followed, the downtown Angels’ charter was not declared a criminal organization but several members were found guilty of drug-related offences.