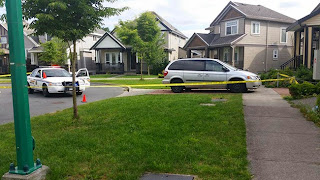 A drive-by shooting in Clayton Heights Wednesday afternoon that left a man wounded. The shooting took place in front of a business complex in the 7200 block of 192A St. about 3:30 p.m. Clayton Heights is a nice area near the Langley border but several gang bangers have moved into the neighborhood.

Kim Bolan is reporting that Shaunce Poirier is the name of the victim shot in Surrey Monday. There was a stabbing fatality yesterday in Newton and a dead body found in the Fraser river under the Pattullo Bridge Tuesday. Scan BC reported that #Vancouver Police were on scene with a male shot several times in a restaurant at 5073 Victoria Dr. Suspect fled in a silver vehicle.

The Vancouver Province reported that shooting was at the Lam Hoa Quan Restaurant on Victoria Drive, near East 34th. Investigators believe the gunman walked into the restaurant through a rear entrance, shot the victim, and left the same way. The shooting is the third in East Vancouver so far in June and follows the shooting of a man in March in nearly the same location.

Scan BC is now reporting that #Surrey #RCMP have located a body in a house at 2500 156 St (Whiterock). Homicide Team called as circumstances are suspicious. Kim Bolan reported that "Someone wearing HA support wear showed up at police tape, gave details of scene to someone on phone and left. Wouldn't give his name." She seemed to have been on scene tweeting a play by play after SWAT was called in and left without an arrest.

Kim Bolan is reporting that the name of this victim was Timothy Szabolcsi. Seemingly he was a con man that apeared on Dr. Phil.