Another stabbing at Oppenheimer Park 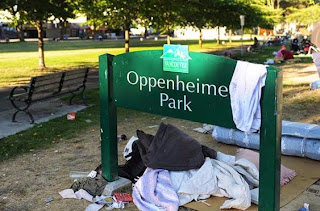 The Vancouver Province reported that there was another serious stabbing near Oppenheimer Park in East Vancouver. Their eloquent description of the event is as follows:

The trail of dried blood runs from Vancouver's East Hastings Street down Jackson Street to Oppenheimer Park. For almost three blocks, a man suffering from a serious knife wound to his neck staggered early Monday down the notoriously mean streets and then collapsed - all to the horror of a handful of people in the area. Vancouver police were summoned to the Downtown Eastside crime scene by a passerby at about 1 a.m. and found the 41-year-old man covered in blood.

The man, who has yet to be identified, was taken to hospital where he underwent surgery and is now listed in stable condition. "It is bad down here," said Shirley Morgan, 64, who lives close to Oppenheimer Park and visits the park daily, but only during the day. "You don't want to be here late at night. "People get drunk or high on drugs and then start fights," she added.

Once again they are highlighting the drug related violence in the DTES that is continuous but we rarely hear about. They also point out that Oppenheimer Park was the scene of another knife attack in April, with the victim suffering fatal injuries. Residents of the neighbourhood have witnessed shootings, constant injection drug use, crack cocaine-fuelled craziness and mentally-ill people in the depths of despair.

"People get crazy around here," said area resident Sean Keoman, 59. Vancouver police spokesman Sgt. Randy Fincham said that so far this year he said there have been nine serious assaults in the Oppenheimer Park area, compared to only three in the same time frame in 2013. Everyone said that letting the Hells Angels take over the drug trade in Oppenheimer Park cleaned it up. Evidently not. 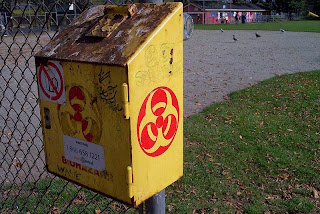