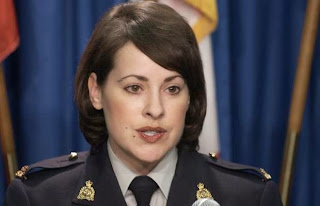 In the wake of the Jim Brown cover up hearing we find out that Catherine Galliford and Grant Wakefield are cousins. Catherine Galliford was the RCMP spokesperson during the Pickton arrest and the Air India scandal. After going public with her sexual harassment complaint several other female RCMP officers joined a class action law suit with Klein/Lyons. Catherine isn't part of the class action. She just has her own complaint that has fallen on deaf ears.

It turns out these two stalwart individuals are cousins. When the RCMP illegally searched Grant's home he was asked about his cousin. That had nothing to do with the DVD they claimed they were looking for. The one they thought Jim Brown had that was pertinent to the Pickton investigation. Instead of searching Jim Brown's home for it they searched Grant Wakefield's home and seized his computer hard drive. They stole private property and have not returned it. That is theft. Sgt. Dave Chauhan's unprofessional conduct during that illegal search was disgusting.

CBC already reported on the disturbing abuse of power the RCMP exhibited when they illegally searched Grant Wakefield's home and stole his personal property. It had all the appearances of a cover up. Jim Brown erroneously sued Grant as well as Cameron Ward, the lawyer for the families of the missing women in the Inquiry for defamation. Jim Brown lied and said it was a private profile he posted pictures on which was false. I saw the public profile myself. I didn't have to log into anything to see it. The RCMP seized pictures from Grant's hard drive so he couldn't defend himself in that court action. They aided and abetted that disgusting cover up. Again.

Posted by Dennis Watson at 5:09 AM