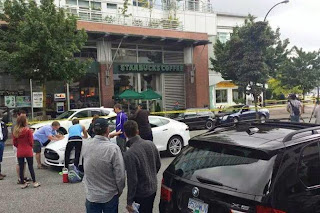 CBC is reporting that after a man was shot near a Starbucks store in Vancouver this morning, the suspect was chased to Science World where shots were exchanged with police officers, leaving the suspect with a bullet wound and an officer with injuries from broken glass. Police said the shooting victim was a 52-year-old man. Several witnesses told CBC News that the victim was Paul Dragan, owner of the Reckless bike shop on Davie Street. Surprisingly enough this one doesn't sound gang related. It sounds like a crazed disgruntled employee. We had one of those on Vancouver Island not too long ago. Tragic. Yet the drug related shootings are avoidable.