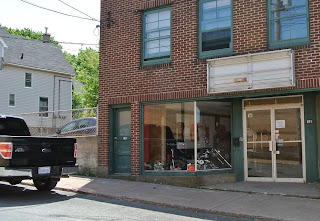 After getting kicked out of Nova Scotia the Hells Angels are still trying to peddle their presence in that fine Province. The New Glasgow News is reporting that Clothing inside a storefront at 181 MacLean Street New Glasgow, Nova Scotia has 81 written on it. Support shirts for the Hells Angels. "A large number of bikes have been seen in front of the building. On Monday morning there was a bike in the window with Gate Keepers written on it. Gate Keepers is an affiliate of the Hells Angels. A man out front said he was there to pick up a part for his bike. Asked if it was a Gate Keepers store, he said it was HA."