Another shooting in East Vancovuer 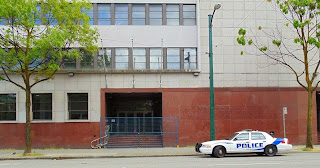 Things have sure warmed up across the board. Kim Bolan is reporting that there was another shooting in Vancouver today. A 22 year old male was shot near Abbott and Keefer. He walked to St Paul's hospital at 2:30 AM where he was treated and released into police custody but is uncooperative with police.

A police spokesperson came out with the same old nonsense about how violent crime is decreasing over all so all these public shootings are nothing to worry about. Violent crime is not decreasing in East Vancouver. Crime statistics are being suppressed because they closed the local police station to public access. Stabbings happen there on a daily basis.

“The shootings and violence that you are seeing right now – these are targeted incidents they are generally involving people that are involved in high risk behavior, high-risk activity – gang activity, drug activity,” Montague said. True. That means we should be arresting the drug dealers that sell crack in public if we want to reduce this kind of perpetual public gun violence. The New York model is somewhat more effective than the bullsh*t model.