Reflecting on Normandy: Maggie What have we done? 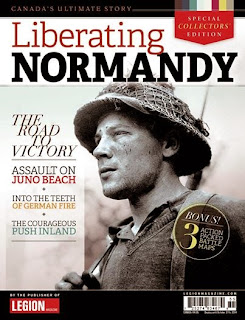 To commemorate the 70th anniversary of D-Day, the day of the initial assaults liberating Normandy on Tuesday 6 June 1944, the Legion Magazine has put out a pretty spectacular special edition as a tribute to that colossal and historic sacrifice. This Father's Day I want to remember all the noble soldiers who gave up their chance to become fathers and in so doing became fathers of freedom for us all. Lest we forget our freedom was bought with a price and can just as easily be lost if we do not remain vigilant and true to the same principles those great men fought and died for.

World War I and II were clear cut good versus evil. Fascism was invading and oppressing Europe and the world united to oppose them. After that victory there was a dark evil created from within that had the same mandate the enemy on the other side of the battlefield had. To destroy our liberty. Yet this new enemy that was created from within was based on fraud and deceit.

After the war Winston Churchill wrote a book called a Warning to the West. In that book he talked about one of his greatest concerns. He said that everyone was so focused on overcoming Fascism, that they missed another similar threat from one of our Allies, the threat of Communism. He describes in detail how Poland was tricked. How Stalin "liberated" them from the Nazis only to oppress them with Communism which continued to oppress eastern Europe for many years after the war. In east Berlin the machine guns were turned inwards to prevent occupants from escaping.

The Korean War was an extension of that struggle. Communism fueled by China took over north Korea and tried tio invade and oppress south Korea. Canada was right in helping repel that invasion. Vietnam was similar. Canada was wrong for not helping in that conflict. Yet Iraq changed everything and that deception was based on the evil from within that was created after the second world war. It was the creation of the CIA. That was the secret society Kennedy warned us about.

Two significant changes have occurred since World War II. In Vietnam the CIA began it's drug trafficking addiction under the direction of George Bush senior. In Iraq MI-6 began a campaign of deception known as Mass Appeal intentionally sending out false information about Iraq's weapons of mass destruction. Bush said Iraq has them, invaded and when proved to be wrong declared mission accomplished. The invasion of Iraq was about oil not weapons of mass destruction.

This is the colossal change that has taken place since World War II. When armies defend corporations not countries and civilians. A change that is continuing in Colombia where Canadian oil companies are protected by Canadian and US troops. These oil companies don't represent Canada. They represent private corporations obsessed with profit at the expense of consumers and taxpayers alike. Just like in Afghanistan.

One minute the US oil companies are wining and dining the Taliban trying to win the contract for the Central Asia Gas pipeline through Afghanistan and as soon as they award the contract to a firm from Argentina, they were invaded and that decision was reversed. Afghanistan is a clear example of the double deception of modern times. Military used to promote corporate interests as well as the "intelligence" communities addiction to drug trafficking. Right before the invasion of Afghanistan the Taliban had almost completely stopped the production of opium. After the allied invasion the production of opium increased each year to record levels with US military actually protecting the opium crops.

Libya was another example of a war we should not have been involved in. It was about oil not freedom. One minute Sarkozy was trying to convince the world we should trust Gaddafi with nuclear power then as soon as Gaddafi turns down the bid to buy a French Reactor and buy one from somewhere else, we helped that dirty dog invade and execute his biggest campaign contributor.

It's like the Pink Floyd album The Final Cut Requiem for a Post War Dream where they ask Maggie, what have we done? Referring of course to Maggie Thatcher and the noble ideals we once fought to uphold. Things have indeed changed considerably since them. Who hath done this? Who hath corrupted the fruit of the vineyard? An enemy hath done this. An enemy from within.

We cannot talk about criminal organizations like the Hells Angels without talking about criminal organizations like CSEC. CSEC's mandate is to break the law and spy on Canadians and allies without a warrant. In Brazil CSEC was caught spying on people on behalf of corporations. This has taken us to a place where corrupt politicians say one thing and do another. They say they are right wing and believe in protecting freedom, balancing budgets and reducing taxes but they do the exact opposite. A $1.2 billion spy palace is indeed a waste of money. So is losing billions of tax dollars a year from their budget. If that isn't terrorism I don't know what is. What have we done? 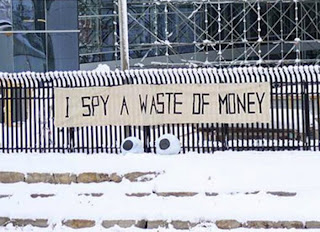 Nationalizing the oil or mining rights is not a bad idea. It balances the budget and reduces taxes. One of the purposes of Operation Fast and Furious was to overturn the Nationalization of Mexico's oil and take those profits out of the hands of the people and put it into the hands of a corporation.