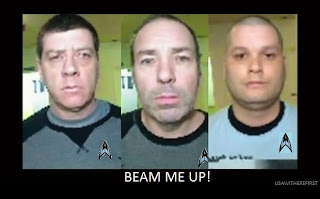 CBC is reporting that Provincial police are searching for three inmates with previous ties to the Hells Angels who escaped from a Quebec City detention centre using a helicopter. A Sûreté du Québec spokesperson confirmed to CBC News that the prison break occurred at 7:45 p.m. ET from Orsainville Detention Centre and the inmates fled westbound in a green helicopter. Police are now searching for Yves Denis, 35, Denis Lefebvre, 53, and 49-year-old Serge Pomerleau.

In 2010, Lefebvre was arrested by provincial police after a drug operation bust known as Project Crayfish that led to dozens of arrests. He was reported to have had ties to the Hells Angels. During the bust police seized multiple weapons, 41 vehicles, a plane, a helicopter and $905,000.

The three who escaped ere being held at the detention centre waiting to stand trial, but it was not immediately clear what charges they were facing. NBC posted a picture of the suspects at large.

Special thanks to a blog reader for the revised photo.

Global is reporting that the Treckies have been captured in Montreal.