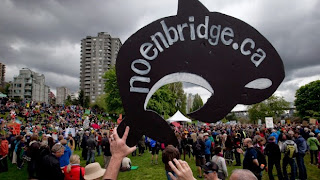 The Pipeline Protests have begun. After unilaterally removing BC's say in the proposal to build a pipeline for dirty tar sands oil across the province to be refined in Kitamat, Stephen Harper announced they have decided to proceed regardless of local concerns. Time for some court action with Stephen Harper's name on it. Especially when it comes to legal liability for damages when that pipeline leaks. No corporations without legal liability here. We need to make Stephen Harper personally liable.

Let me say I'm not against the idea of a pipeline. I'm just totally against how they're doing it. First, it's not refined oil going through the pipeline it's dirty tar sands oil. When that leaks and we know it will, it creates a much more significant amount of environmental damage to our drinking water.

So why not refine it at source? Why risk putting that extra toxic substance though the pipeline? Why? The other obvious concern is what to do with the petroleum coke byproduct. Detroit had a mountain of petroleum coke from Canadian Tar sands oil brought to them by Enbridge and they just didn't know what to do with it. If we don't refine it at source we will need a plan in place what to do with all that byproduct in Kitimat because putting that toxic mess onto tankers is just way too high risk for navigating our precious coastline.

Why Enbridge? They have a horrible record for pipeline maintenance and oils spills in the United States. They have we used tax dollars to create a oil monopoly and thereby destroyed the free market. Years ago the United States Supreme court ruled that illegal when the Rockefellers used ruthless tactics to obtain an monopoly on the oil through Standard oil. Anti trust laws forbade it. Now politicians who get kickbacks in campaign contributions call it good business. That is wrong. An oil monopoly is bad for Canada and most certainly bad for consumers.

What assurance do we have that Enbridge will do a better job at pipeline maintenance and leak clean ups then they have done in the United States? Right now they are the wrong choice.

Alberta won't pay for BC oil spill clean up

Nationalizing the oil in Canada would benefit taxpayers and consumers both.