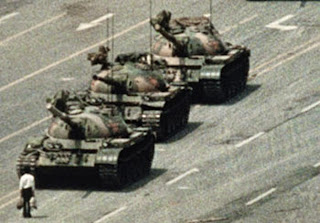 The Vancouver Province is reporting that as the rest of the world recalls the Tiananmen Square massacre, China forbids its citizens from mentioning the atrocity. I'm still trying to find the link to the story in today's paper which claims numerous people have been imprisoned or gone missing in an attempt to cover up and prevent a public demonstration on the anniversary of the Tiananmen Square massacre where Communist soldiers opened fire on university students and activists who demonstrated in support of democracy.

We all remember the famous picture and video clip of one protestor staring down a tank. Yet the important thing to remember is that when the cameras weren't on, the troops started shooting unarmed civilians in public protest. Communism in China is still oppressing civil liberty and the freedom of speech. We should not be supporting that government. At all.

In contrast Stephen Harper goes on a ridiculous tirade about Putin and Russia's history of murder and oppression under Communism. Only that was Stalin not Putin and Russia isn't Communist any more. That's like going off on the current President of Germany because something Hitler did. The war is over. So why Harper is going off on this bizarre Russian tirade is rather astounding since they are no longer Communist but China is and he is bending over backwards for China despite their continued oppression with Communism and their continued civil rights abuses. The double standard is rather astounding.

Not only is he turning a blind eye to Communist China's human rights abuses, but he is once again pushing the sale of Canadian Reactors to China which they can use to make nuclear weapons for North Korea. Instead of selling China oil, he gave China our oil rights so every time we get over charged at the pumps we are funding the military expansion of that Communist dictatorship. So his double standard toward Russia is absolutely bizarre.

Putin is actually protecting Russian churches from being desecrated by those Pussy riot clowns. How is that Communism? It is clear that Harper is a raging lunatic. Robo calls are in the news again,. How is that supporting democracy and public accountability? Veterans are protesting again. How is rolling back veterans' pensions and benefits helping Canada become strong militarily?

Since Russia does have a past history with oppression, that is something to be aware of. When they send MIG fighter jets over the arctic circle to challenge Canada we need to send jets to face them. Only Harper's insider trading yets aren't for the arctic so they can't help protect Canada. They only fill the pockets of the companies his candidates lobbied for.

Stephen Harper has killed traditional Conservative values in Canada. He pimped Preston Manning. He turned the Reform Party's dream of fiscal responsibility and public accountability into a Brian Mulroney nightmare of pork barrel politics, filled with insider trading and the destruction of civil liberty. Stephen Harper is not a Conservative. He is a fraud. This is where the Neo Cons are taking us. Far far away from civil liberty and fiscal responsibility into slavery fueled with lies.

Speaking of lies, check out this ridiculous article by Andrew Coyne reprinted in the Vancouver Province. He starts by going off on the unlawful invasion of Iraq as though that was somehow a good thing. Iraq was invaded based on a lie. Bush said they had WMD and they didn't. MI 6 was caught red handed giving false information to the media about Iraq's WMD and the British weapons inspector who blew the whistle on that premeditated lie died of a suspicious suicide.

Andrew the crackhead Coyne has the audacity to compare Putin to Saddam Hussein and says now Russia has unilaterally invaded and annexed a part of Ukraine. That's not entirely true. He is protecting the Russian majority in Crimea from a European invasion by the same bankers and "intelligence" agencies that created the Greek financial crisis. The majority of the citizens in Crimea and Eastern Ukraine support Russia not Europe. Those are the facts on the table.

Andrew the crackhead Coyne admits that a leading British anti-war organization, Stop The War, issued a release that not only refrained from criticizing Russian President Vladimir Putin’s decision to invade Crimea, but blamed the whole crisis squarely on the West. Putin has no right to invade western Ukraine but has every right to defend eastern Ukraine from a European invasion. We need to be more concerned with our support of Communism in China that Putin's concern for the Russian majority in eastern Ukraine.

So Harper is sending Canadian troops to Europe to support the invasion of eastern Ukraine against the democratic will of the majority of the citizens living there. Is he going to pay up the current veterans pensions and benefits he rolled back? Please advise. Since he's so worried about the Russian threat, is he going to scrap his huge fleet of insider trading yets that forced him to roll back veterans pensions and benefits and buy a couple of real jets that can actually be used in the arctic to defend Canada from a Russian threat? Please advise.