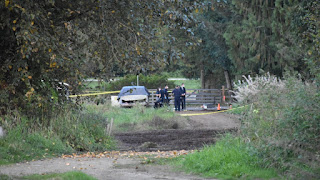 CTV is reporting that "Homicide investigators have been called to Maple Ridge after a body was discovered inside a burning pickup truck in the city early Saturday morning. Police officers were called to the intersection of Park Lane and Vernon Trail around 1:30 a.m. for a report that a black pickup truck was on fire, according to a news release from Ridge Meadows RCMP.

"Firefighters were also called to the scene. After the flames were extinguished, a body was located inside the truck, police said. The Lower Mainland's Integrated Homicide Investigation Team has taken over the case, according to RCMP."