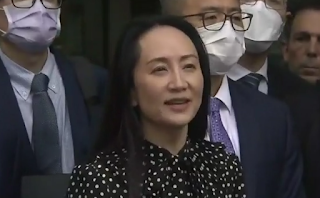 CTV is reprting that "A B.C. judge has discharged the extradition matter against Huawei executive Meng Wanzhou after U.S. Justice Department officials reached a deal to resolve the criminal charges against her, allowing the woman who has been at the centre of a years-long major geopolitical case to enter into a deferred prosecution agreement and leave Canada, under certain terms. CTV News confirmed that Meng checked in at Vancouver International Airport and departed on a flight to China Friday evening." As I previously said, that case had nothing to do with justice. It was simply a trade war. That is all. The two Michaels was simply a hostage taking.

The Toronto Star is reporting that "After years of denying the imprisonment of the two Michaels for espionage had anything to do with the arrest of Meng for fraud, China seemed to have dropped the charade. This was hostage diplomacy, and it looked to have paid off." Indeed.

I thought we didn't negotiate with terrorists. Evidently, we do. It is obvious that the two Michaels were innocent of any crime just like all the Falun Gong and the Uyghurs who are wrongfully imprisoned and executed for their organs. This is the dictatorship that owns our media.