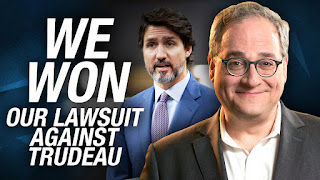 Rebel News had to hire a lawyer and sue Justin Trudeau for the right to cover the leadership debate. Justin Trudeau hired seven lawyers to try and ban them but the court awarded in their favor. It kind of shows you the State of our Union or should I say Confederation.

Banning Rebel News from covering government events is Orwellian. Rebel News is one of the only credible news outlets out there. Their determination to preserve free speech is admirable.

I didn't watch the debate because the candidate I'm voting for wasn't allowed to participate. That debate was a circus side show of bad actors arguing about how many rights they want to take away from us. None of those candidates support the Canadian Charter of Rights.

The Fake steam Media's coverage of the debate said look at what the candidates are promising. That in itself is the root of the problem. We don't give a rat's ass what they are promising. More government means more taxes and less freedom. This pork barrel politics is what gave rise to Mulroneyism and the birth of the Reform Party.

The Reform Party swept the west by striving to bring back traditional Conservative principles of civl liberty and fiscal responsibility. Eastern Canada saw it as a separatist party and didn't embrace it but that's not what it was. Now we see a new star rise out of the East and the West is embracing it. Less government, more freedom and less taxes for everyone. Truth shall prevail.