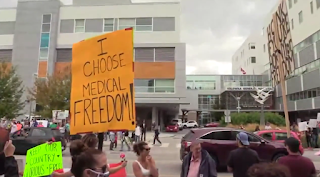 Update: Vancouver protest - Victoria protest. Time to get rid of Bonnie Henry and the BC NDP.

50% of firemen and law enforcement in LA and New York reject the vaccine. Ask yourself why.

Castanet is reporting that "Upwards of a thousand people turned out to Kelowna General Hospital for a protest against vaccine passports on Wednesday afternoon. The protest in Kelowna is one of several taking place across the country, including in Kamloops."

Castanet, which has been promoting Covid misinformation like all the other mainstream media outlets. is emphasising politicians concern with the choice of holding a protest outside a hospital without addressing the colossal concerns the protesters have.

The video report did admit several nurses were participating in the protest. The video report also admitted that the protest was not stopping health care workers from going to work,. It was simply a protest outside a hospital that was well received by the public.

One disturbing comment the Castanet video report made was a quote from the mayor who said "This protest outside a Kelowna General hospital speaks to the level of intellect of those involved." I doubt any of those local residents will be voting for that mayor next election.

It shows us how politicians disregard public concerns and how the media tries to misrepresent public concerns in accordance with the views of their corporate sponsors. That was a really rude thing to say. Their numbers were way low. thousands were in attendance not hundreds. None of those people matter?

They admitted nurses were participating in the protest and would not state which hospital they are from for obvious reasons. Those nurses don't matter? Only the ones that feed Pharma greed? One of the many concerns with Covid misrepresentation has been medical cencorship.

The Canada Health Alliance is a group of medical doctors in Ontario that host a website to counter the false information the media keeps promoting.. The BC NDP sent out a scathing email asking for money claiming that the vaccine passports are just a temporary attack on small business and civil liberty. We all saw how a two week lockdown to flatten the curve extended to the biggest financial attack on our economic sovereignty in history.

Rebel News sent an undercover reporter in Montreal to ask Jagmeet Singh how he felt about making vaccine passports permanent. He cheerfully responded yes, he supports making them permanent because he believes in keeping people safe. That is yet another socialist lie.

Remember out linear diagram representing political ideologies? Socialists believe in more government, less freedom and more taxes. That is what Jagmeet Singh supports. It is a political ploy because it is based on a lie. People who have recovered from Covid have more antibodies than people who have taken the experimental RNA vaccine.

Remember, these vaccines are different. A traditional vaccine injects a dead virus into your arm that stays in your arm. The body sends antibodies to the arm to fight off the dead virus and thereby builds up immunity to it.

The RNA vaccines inject live weaker or variant viruses into the arm. The RNA causes the vaccine to bypass the immune system and travel throughout the body into every organ. Some people aren't concerned about the side effects of the vaccine. Others aren't concerned about Covid. Medical choice is a fundamental right. We have right to decide what is injected into our body. Especially if they make vaccine passports permanent.

If they make vaccine passports permanent, like Jagmeet Singh proposes, we have absolutely no way to determine what the booster shot ingredients are. Think about it. Vaccines were normally a one-shot deal. Requiring two vaccines before you are fully vaccinated was a way for the pharmaceutical companies to double their money. These booster shots are absurd. Some claim they want to give them to you every 90 days. We are talking about billions and billions of tax dollars that could be spent on other things.

When the BC NDP had a minority government they tread softly on civil liberty. As soon as they got a majority, they started violating the Charter of Rights and clamped down on civil liberty. That is what Socialists do. They say one thing and do the other. Socialism represents more government, less freedom and more taxes. As we have seen, the NDP are NFG. 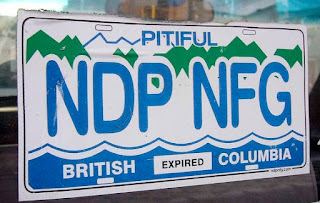