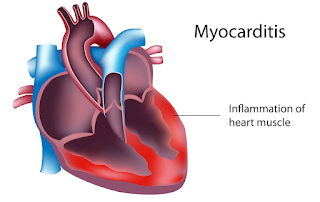 The Toronto Sun is reporting that "A report quietly released last week by Public Health Ontario (PHO) tallies the number of people in the province who have presented to hospital with heart inflammation following mRNA vaccination, and it skews heavily towards young people."

"As of Aug. 7, there were 106 incidents of myocarditis/pericarditis in Ontarians under the age of 25. That’s slightly more than half of the total of all such incidents. Broken down further, 31 of these cases were in 12- to 17-year-olds and 75 were in 18- to 24-year-olds. The vast majority - 80% - were in males." Global television sure didn't cover that.

"The report explains that PHO issued a directive in June for public health units to increase their surveillance of this side effect following reports from the United States and Israel of similar concerns unfolding in those countries. The reporting rate of myocarditis/pericarditis was higher following the second dose of mRNA vaccine than after the first, particularly for those receiving the Moderna vaccine as the second dose of the series (regardless of the product for the first dose),” the report explains." PHO adds that the reporting rate for heart inflammation in those 18-24 was seven times higher with Moderna than with Pfizer. (The only vaccine currently used for 12- to 17-year-olds in Ontario is Pfizer." However, Pfizer has been known to cause myocarditis as well.

I saw a vaccine commercial claiming that these Covid vaccines are the same technology that vaccines have been using for the past ten years. That is a lie. As Dr. Byram W. Bridle pointed out RNA vaccines are very different than traditional vaccines.

"Myocarditis is inflammation of the heart muscle. It is most often caused by a virus, but can also be caused by bacteria, a fungus or even certain chemicals. In response to the infection, the body turns against its own heart muscle." This isn't about tin foil hats. This is about medical censorship.

Dr Kulvinder Kaur represents the science. A coalition of medical doctors from Ontario called the Canada Health Alliance has posted a web site to counter the false information the media is bombarding us with just like the Canadian Covid Alliance.

Informed consent is a fundamental right. Waving parental consent for minors to take an experimental vaccine based on false information is unlawful. Health Canada admitted it.