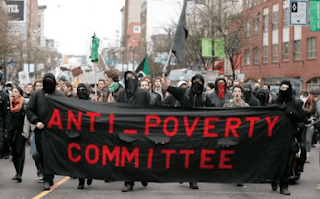 The Canadian Press is reporting that "A group representing drug users has filed a lawsuit against the federal government in British Columbia Supreme Court seeking to decriminalize the possession of illicit drugs, arguing criminalization during the overdose crisis violates charter rights." AYFKM? Smoking crack is not a Charter Right.

This exemplifies the con we now face. The Anti-Poverty Committee in the DTES don't give a rat's a*s about the poor. They use the poor to get rich and powerful. The Anti-Poverty Committee in the DTES are Communists with an agenda. That agenda doesn't include helping the poor any more than VANDU does. VANDU, the Vancouver Drug Users Network is a NPO front for Organized crime. They exploit addicts and make money off of them. Handing out free drugs is what drug dealers do to get customers adicted.

We already have decriminalization in the DTES. Addicts smoke crack, crystal meth and inject heroin in public 24 hours a day. Addicts aren't arrested for being addicts. As a result, they are empowered with boldness. Addicts in the DTES defiantly jay walk through traffic not because they're stoned but because of their arrogance. "We own the world so get out of my way."

The Opium War has now Begun

Communists in the West promote drug addiction. Yet drugs are not legal or decriminalized under Communism. Under Communism drugs are very much illegal with harsh penalties. They believe in capital punishment and execute drug dealers without hesitation.

Why do Communists in the West promote drug addiction? To weaken our society just like England did during the Opium War. The National Army Museum is reporting that Between 1839 and 1842 England smuggled opium into China illegally to counter the trade imbalance with China. This was immoral and wrong. Now China is doing this to us as payback.

Communists are promoting drug addiction in the West so they can take over just like they did in China. Once they take over, there will be no free drugs. That is simply a means to an end like Anarchism. The CCP used opium to conquer the Chinese Republic created in 1911 and create a Communist State. The CCP publicly opposed drug use but secretly flooded China with opium until 1949 when it seized power. After it seized power, drugs were banned.