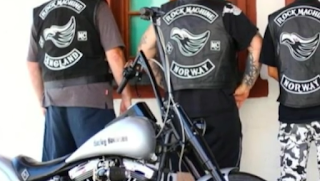 TBM, the definitive source for worldwide MC news has posted a disappointing update on the political drama within the Rock Machine Canada. It states the self-proclaimed national president doesn't have a motorcycle license. That's kind of my beef with the cub pack. Although they have licenses, they don't ride motorcycles they just ride around in SUVs and sell drugs.

TBM has been following RM politics for quite some time. They saw the RM rise from the ashes in Canada, expand into Australia and break into Europe through Norway. They also saw the meltdowns that went along with it. Suat Erköse was selling patches online in Europe.

I think people need to realize the Rock Machine now has absolutely nothing to do with the original Rock Machine that was famous for waging a long war with the Hells Angels in Quebec. They blew sh*t up. That Rock Machine was basically disbanded in 2000, when Salvatore, his brother and all the leaders along with their hit squad crossed over to join the Hells Angels. Then 10 years later Sean Brown started a new club using the same name but modifying the logo.

The original logo was a yellow eagle's head. It was actually gold but when you draw it, people use yellow to represent gold. IRL people use gold dust in the paint. Since Sean stole the name, he had to change the logo and made it white. I think it looks kinda cool.

Then the new group kicked Sean out because he didn't want to bring back the Quebec war with the red and white which was probably a good thing. I spoke with an old timer involved at the time and he said the young kids just wanted to make it another gang and sell drugs like they do now.

I spoke with a young man from Quebec who had joined the new group after they kicked Sean out. His father had been killed by the Hells Angels in the Quebec biker war. He wanted revenge. He was totally sincere. It sounds like the group has gone through a lot of growing pains since then.

Sean Brown went from RM in Ontario to Vagos. Then Vagos patched over to Outlaws and Sean went to Cali with Vagos. I was probably a little hard on him at the time. I think he had credibility and he meant well. That's kind of my pet peeve. We understand how puppet clubs can patch over to 1% clubs but all this such and such forever, forever such and such never lasts long. As soon as they change allegiances, they're burning old patches and it's forever the new group.

When I first saw the TBM article I thought it was written by Wally. I'm told that it wasn't. However, the old RM has a new allegiance. Now they support the Hells Angels and they want to discredit rivals. I've talked about that whole scam before with the original RM. They were legitimately notorious. They were genuinely hard core. There's no disputing that. Yet there are two facts that stain their legacy. In the year 2000 they all crossed over and joined their arch enemies. There's no way of getting around that. That makes the second fact hard to ignore.

I was told that during the Quebec biker war, the RM's hit squad targeted Mom Boucher's political rivals within the Hells Angels. That means the war was fake. Mommy dearest was killing his own brothers who he saw as a threat to his leadership. The fact that they all crossed over to support him when he went to jail makes that difficult to deny.

I got rid of Facebook a long time ago. I couldn't handle all the drama. It was all "You're fake, she's fake, I'm fake. We all fall down." A bunch of toy soldiers. You didn't see Bob Green on Facebook. He wasn't posting all his personal information for the police to see. Give your head a shake. Even if it's set to private, they still get warrants and spy on everything you post and mesage.

So, as I said, TBM is the definitive source for Worldwide MC News. Michael Green is the real deal. He left the life. He is the international Spokesperson for TBM with a past in both the Hells Angels and the Bandidos. He knows both sides. Yet TBM isn't just one guy. They have a whole coalition of people behind the scenes that know and understand the life.

Biker News Network and Harley Liberty are credible MC News outlets for the Unted States. I miss the Aging Rebel. He was the real deal. May he Rest in Peace. Yet that ain't me.

Although I ride a cruiser full seasons, I was never a member of a MC and never wanted to be. I always rode alone. I did go for a couple of rides with the Teamsters Horsemen because they were awesome but I never have and never will go under cover. I never pretend to be something I'm not. I started this blog because of the Surrey Six. That was all about Gumby and Jamie Bacon.