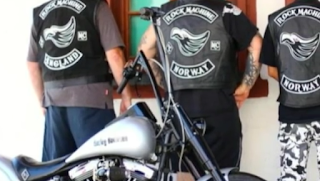 TBM Scandinavia is reporting that three Rock Machine members in Norway have been arrested for the murder of a 31 year old who appears to have been a Bandidos prospect. Bandidos opened a prospect chapter in Norway in 2015 and have a chapter is Oslo. Here in Canada you don't normally see beef between the Rock Machine and the Bandidos. This conflict is new.

Evidently the Rock Machine in Russia had a large number of them patch over to Mongols and it has seemed to have created hard feelings. I guess that's why they're worried about losing some of their members to the Bandidos in Norway.

The Rock Machine is originally from Canada and right now it is a complete mess. Consequently it appears that mess is carrying over to international locations since they are determined to expand without a solid leadership base at home.

Right before Mom Boucher went to jail for planning the murder of a prison guard, his old friend Salvatore Cazzetta along with the remaining founding members of the Rock Machine crossed over and became Hells Angels in what appeared to be an attempt to maintain Mom Boucher's political interests in the Quebec Hells Angels. After crossing over, Salvatore became president of the Montreal chapter of the Hells Angels. After that, the Rock Machine died.

A few years ago Sean Brown and a group of people not related to the original Rock Machine started a new MC with the same name. Sean Brown changed the logo from a yellow or gold eagle's head to a white one. He didn't want to war with the Hells Angels in Quebec so the new kids on the block kicked him out. They wanted to be a gang. They had no interest in forming a MC. Ever since then the Rock Machine in Canada has been a mess. He's in, he's out. He never was in. Yes he was, no he wasn't. It is a complete mess. The original Rock Machine is lost.

It's too bad. They have the best logo.