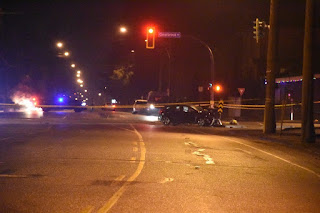 BC Local News is reporting that Two men showed up at hospital tonight (Tuesday) with gunshot wounds after a chaotic incident that also involved a two-car crash. Abbotsford Police Sgt. Judy Bird said police received a call at 6:20 p.m. about possible shots fired in the area of Countess Street and South Fraser Way. Shortly after, police received several calls indicating that two vehicles had crashed in the area of Peardonville and Clearbrook roads.