The Dark side of Donald Trump 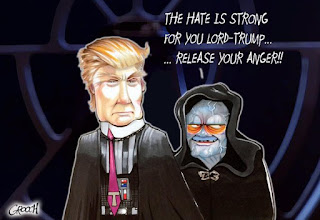 We've seen the dark side of Hillary Clinton. She has been deeply involved with arms dealing, money laundering and drug trafficking for a generation.

Now Donald Trump has revealed his dark side. I'm not referring to his beef with the CIA. That's a good thing. I'm not even referring to another brick in the wall. I'm referring to his ban on Muslims from certain countries but not Saudi Arabia. People seem to think rich muslims are OK but poor muslims aren't. Yet it goes far beyond that. It is a step towards racial profiling.

With one sweep of the pen, Donald Trump has created a ban on immigrants from seven Muslim countries. It includes a ban on green card holders. As a result, US residents traveling abroad have been denied reentry into the United States. This is evil.

In contrast, the Hill is reporting that Canadian Prime Minister Justin Trudeau on Saturday responded to President Trump's executive order banning refugees and halting immigration from several countries by welcoming those refugees to Canada. "To those fleeing persecution, terror & war, Canadians will welcome you, regardless of your faith. Diversity is our strength #WelcomeToCanada" Trudeau tweeted. Makes you proud to be Canadian.

Canada should immediately open their borders to these working professionals denied reentry into the US. This is what I meant when I said I don't like Donald Trump as a person but think as a person, Justin Trudeau is a great guy. If there was only some way to balance the extremes. If Justine Trudeau could get his brain around avoiding unnecessary debt he would be perfect. Right now he is all heart and no business sense. Trump is the opposite. He is no heart all business. Humanity calls for a balance between the two. Welcome to Canada: Bienvenue. 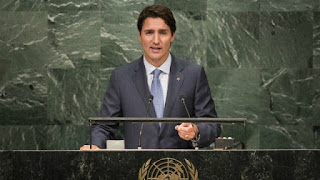 Turns out the Trump ban includes Canadians who hold dual citizenship with one of those seven countries. Those Canadians are no longer allowed to enter the United States. Part of me says why would I want to go to a place like that? The other part of me says you guys are really missing out. Diversity makes us strong.

Update: And now the courts fight back to sustain the constitution.

Canada offers temporary home to those stranded by Trump order