The Lunar New Year and the Rise of the Terracotta Warriors 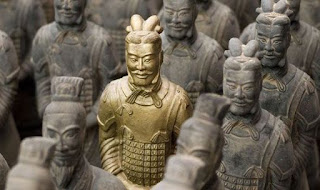 I rode down to Chinatown today to watch the New Years Parade since the Lunar New Year actually falls on a Saturday this year. The place was dead so I pulled over and asked someone where's the parade? They said oh that's on Sunday. My bad. My father always used to say there are three types of people in the world. Those that participate in the parade, those that watch the parade and those that don't even know a parade is on.

I like the Chinese New Year celebrations. Lots of firecrackers, drums and Lion dances. All the noise is supposed to chase off the evil spirits and usher in a New Year. This year is the year of the rooster which seems appropo. This is the year activists claim their right to free speech both in China and here at home. It makes me think of the Terracotta warriors.

Take up our quarrel with the foe to you from failing hands we throw the torch. Be yours to hod on high. If ye break faith with us who die we shall not sleep though poppies grow in Flanders fields. That also applies to the noble Terracotta soldiers. Just for the record, they weren't communist either. China has a magnificent history and culture that predates communism by thousands of years. I've always said that Chinatown is the heartbeat of Vancouver.

In 2014 the Express reported that Filmmakers from Britain, America and China are joining forces to create one of the biggest blockbusters in cinema history, based on the ancient Terracotta Warriors. The warriors are expected to rise from the grave in the Far East to rival Hollywood comic heroes such as Iron Man and Spider-Man." That sounds totally awesome.

The New york Daily News reported that it will be co-produced by "Amazing Spider-Man" producer Avi Arad. I sure hope its still on the table. That has a powerful potential.