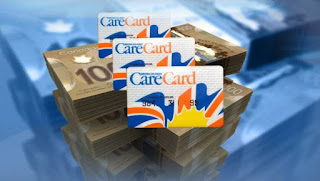 It's interesting to note that BC is one of the only provinces to charge premiums for medical coverage. Alberta used to but they stopped doing that in 2008. Now the general tax revenue covers their medical premiums and they still dont have sales tax.

Most governments, especially the BC Liberals and Gregor Robertson's gluten council are yearning to find any excuse under the sun to raise taxes so they have more money to spend. Gregor Robertson's recent publicity stunt was an offensive scam.

The referendum on raising sales taxes to pay for Translink's mismanagement above and beyond the billion dollars a year regional gas tax they already burn failed. So Gregor Robertson gets a Christy Clark brainstorm. He gets the idea to pimp the fentanyl crisis and use it as an excuse to raise taxes yet again. Only this time his argument fails and we end up shooting ourselves in the foot again. Raising property taxes raises rents and creates more homeless.

Gregor Robertson's tax hike was a complete scam because he raised property taxes 0.5 % to pay for more harm promotion and an additional 3.4 % to put in his own pocket for more tax revenue. He used the addicts as an excuse for him to raise taxes on other things. This hike becomes colossal when you factor in the fact that property assessments in Vancouver have doubled which means property tax has skyrocketed and is creating more homeless not less.

Yet the real crunch is yet to come. The Devil's deal as promoted by Mr. Conflict of Interest, Larry Campbell wants to buy addicts prescription heroin. Who is going to pay for that? Will taxes and medical premiums continue to skyrocket or will they simply do what many Medical clinics do in Surrey and close down as soon as all the drug addicts have filled their quota so no one else can get medical treatment for anything other than drug addiction. That is what's happening right now.

All the methadone patients line up at the medical clinic and after they're done, the clinic shuts down for the rest of the day so no one else can get medical treatment. At the medical clinic in Guildford Superstore, one doctor is on a three month suspension for filling out methadone prescriptions without even seeing the patients. It's big business and is part of the colossal pharmaceutical scam that is bleeding taxpayers dry. Adding prescription heroin to the list will bankrupt the public health care system faster than you can say conflict of interest.

Promoting drug rehabilitation like Price Pro that help addicts get off drugs and teach them life skills will do far more in raising the quality of life for everyone including addicts and it wouldn't burn tax dollars at an unprecedented rate in favor of the Great Canadian Pharmaceutical Fraud.