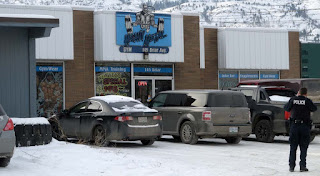 The Vancouver Province is reporting that Police will return items seized earlier this month during a high-profile raid of a North Shore gym - a search described by the lawyer for the business owner as “egregious” and “unlawful.” Heavily armed Kamloops Mounties and RCMP tactical officers descended on Heavy Metal Gym on Jan. 13. According to City of Kamloops licensing documents, the gym is owned by Konaam Shirzad - described in the past as a co-founder of the Red Scorpions gang. Jeremy Jensen, Shirzad’s lawyer, said police found nothing incriminating at the gym and alleged cops were specifically forbidden from seizing what they did. Jensen said investigators made off with computers and other office equipment.

Shirzad said his gym continues to operate at 145 Briar Ave. “The gym has been open the whole time,” he said. “It was never closed. It is not closed. People should feel free to come here. The only thing to fear is the police and their over-reaction.” Shirzad said police did not find anything illegal in his gym, because he is no longer part of the lifestyle that landed him behind bars in the last decade. “My past got brought up, but I’ve been doing a lot of good lately,” Shirzad said.

The traffic stop and drug seizure that led to the high profile public raid with freaking stun grenades wasn't the owner of the gym it was someone else. I guess I called it.