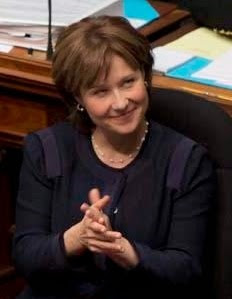 Well, Postmedia News missed it but Christy Clark's political corruption just made the New York Times. The New York Times is reporting that Christy Clark gets personally paid $50,000 a year above and beyond her $195,0000 salary from the Liberal party which comes from political contributions. When you make tax deductible contributions to a political party, that doesn't usually go directly into a politicians pocket as salary.

The New York Times reports that the son of BC's conflict-of-interest commissioner works for Christy Clark. That is dripping in conflict of interest. Like I keep saying, BC politics is way more corrupt than Quebec. The only difference is that Quebec has a task force investigating organized crime while BC doesn't. In fact, every time a police task force found organized crime, a government body disbanded that police task force. Christy Clark is the queen of corruption in a party that has been dirty since Gordon Campbell.

The article claims "Unlike many other provinces in Canada, British Columbia has no limits on political donations. Wealthy individuals, corporations, unions and even foreigners are allowed to donate large amounts to political parties there." Political donations from foreigners? Let's look at how much money China's organ harvesting of political prisoners contribute.

The Vancouver Sun stated that the Organization for Economic Cooperation and Development declared that foreign donations to political parties threaten sovereignty. Teck Resources and its affiliates, which are 17 per cent owned by the government of China, have donated more than $2 million to the B.C. Liberals.

The Globe and Mail reported that "A prominent Vancouver real estate developer wanted by the Chinese government on corruption charges has made numerous political contributions over the years, particularly to the B.C. and federal Liberal parties, and also has a daughter who heads the provincial branch of the Young Liberals of Canada."

Not to mention BC Rail and Campbell Heights or the cuts to the BC Gang Task Force. Much.

Douglas todd from the Vancouver Sun is reporting that "Australian voters are outraged by recent exposes, including an Australian Broadcast Corporation investigation that revealed China-related companies gave more than $5.5 million to Australian politicians. Australian voters have become disgusted by the fact they live in one of the few advanced countries in the world that allows foreign companies, without restriction, to donate to its political parties. Australia’s politicians are, in effect, finally facing censure for acting just like another outlier, the B.C. Liberal Party, which has also taken in millions of dollars from companies based in Europe, the U.S. and Asia."

Douglas Todd also points put that The issue of foreign political donations draws little public attention on Canada’s West Coast, however. Although the federal government and most provinces ban corporate and union contributions, the B.C. Liberals in the past decade took in more than $70 million in corporate donations (while the NDP accepted $11 million from unions). More than $12 million was donated to the B.C. Liberals by the real estate sector.