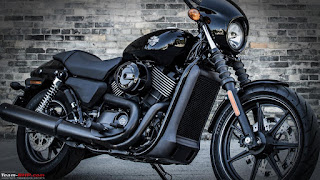 Speaking of shrewd business, I saw in the paper that Harley Davidson is coming out with a new liquid cooled motorcycle called the Harley Davidson 750 Street at the upcoming motorcycle show at the Tradex in Abbotsford this weekend. So I went down to the dealership to check it out.

The first thing I asked the dealer is what does the 750 represent? It can't be cc because Harleys are measured in cubic inches and he said, nope, it is in fact ccs. I thought the smallest Harley was a 80 cubic inch v twin. This is a new innovation. It used to be 80 cubic inches now it's up to 103. Every year they try to get a little bit bigger and bigger for the fully decked out cruisers. They obviously have a lot of torque but how is your gas mileage? Not so good. Do you really need that large of an engine? It really has the appearance that some of those guy's are desperately trying to overcompensate for something.

There will always be a market for the full meal deal. The 750 street is reaching out to a new market and I think it has a huge potential. A lot of people just can't afford $30,000 for a motorcycle and the collision and comprehensive insurance to keep it on the road. Not everyone out there sells crack. The 750 Street is much more affordable and practical.

Goldhammer's custom motorcycles in Kelowna are indisputably awesome but who can afford $100,000 for a motorcycle? That's a good chunk of a down payment on a home. Then there's the insurance on top of that. I much prefer his custom choppers to the fully decked out Harleys with huge fairings and saddlebags that look more like Goldwings than Harleys. If you want a Goldwing buy a Goldwing. If you want a Harley then buy a Harley. Yet an old timer pointed out they are comfortable on long rides. He recently rode a rigid frame shovelhead to Sturgis.

The 750 street is liquid cooled. A lot of people are tired of the overheating issues in summer from air cooled engines. I thought the only liquid cooled Harley was the V Rod which is a joint venture between Harley Davidson and Porsche. They're pretty cool too. I'm told some of the bigger cruizers are liquid cooled now as well.

The only thing I don't like about the 750 Street is the design of the shocks at the back and more importantly the dust cover on the front shocks. That kinda makes it look like a dirt bike. Other than that I think the bike is awesome and could explode into an untapped market. A lot of people who ride imitation cruisers because of their affordability would gladly cross over to the real thing if they could afford to do so. This is innovation. There certainly is still a market for that.