31 kilos of crystal meth seized at Canada / US border 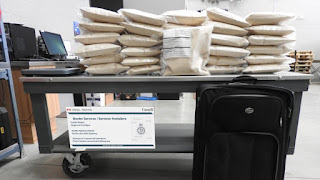 CBC is reporting that "More than 30 kilograms of suspected methamphetamine was confiscated at the Aldergrove, B.C. border crossing last month, officials say. On Dec. 11, 2016, a man driving a commercial truck was pulled over for a regular secondary check. When border services officers searched the vehicle, they found a black suitcase filled with several bags of the narcotics."

It's interesting to note that the crystal meth was coming north from the US into Canada like the cocaine. Evidently now that the Hells Angels meth cook in Surrey has left town, they are having to bring it in from the US. Michael Riconosciuto claimed it was the CIA who were cooking the crystal meth in California that the Hells Angels were distributing. Oliver North hired them as well.

Posted by Dennis Watson at 8:03 AM