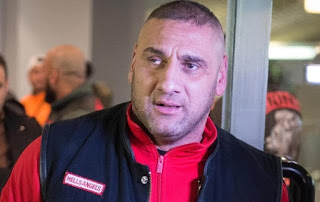 DW dot com is reporting that "Some eight months after a shooting in the German city of Frankfurt, the public prosecutor's office has charged a 56 year old member of the Hells Angels for attempted murder. His accomplice, a 38-year-old Hell's Angel that had reportedly been expelled as member of the Rockerclub a few weeks earlier, is still on the run."

This is related to a drive by shooting in Frankfurt June of last year where two people were seriously injured. DW dot com epoted at the time that the shooting was an internal rivalry between two Hells Angels groups in Germany.

Last year we reported that there had been a rivalry between the Giessen Hells Angels, whose membership is largely of Turkish origin, and the long-established Hells Angels chapter in Frankfurt. Giessen is just north of Frankfurt. Interesting to note that Frankfurt is Germany's financial center and home to the European Central Bank. It's all about the Money so it is.

Posted by Dennis Watson at 3:23 AM